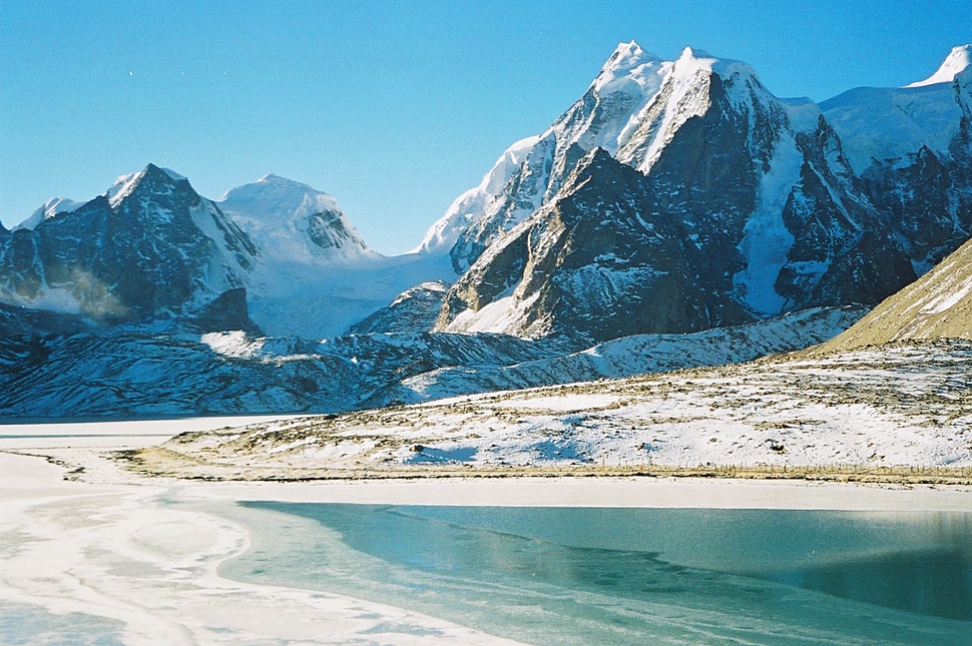 Sikkim (/ˈsɪkɨm/; also known as Shikim or Su Khyim; see Toponymy for other names) is a landlocked Indian state located in the Himalayan mountains. The state is bordered by Nepal to the west, China's Tibet Autonomous Region to the north and east, and Bhutan to the east. The Indian state of West Bengal lies to the south.[2]

With 607,688 inhabitants as of the 2011 census,[1] Sikkim is the least populous state in India and the second-smallest state after Goa in total area, covering approximately 7,096 km2 (2,740 sq mi).[3] Sikkim is nonetheless geographically diverse due to its location in the Himalayas; the climate ranges from subtropical to high alpine, and Kangchenjunga, the world's third-highest peak, is located on Sikkim's border with Nepal.[4] Sikkim is a popular tourist destination, owing to its culture, scenery and biodiversity. It also has the only open land border between India and China.[5] Sikkim's capital and largest city is Gangtok. Almost 25% of the state is covered by the Khangchendzonga National Park.[6]

According to legend, the Buddhist guru Padmasambhava visited Sikkim in the 8th century CE, introduced Buddhism and foretold the era of the Sikkimese monarchy.[7] Sikkim's Namgyal dynasty was established in 1642. Over the next 150 years, the kingdom witnessed frequent raids and territorial losses to Nepalese invaders.[8] In the 19th century, it allied itself with British India, eventually becoming a British protectorate.[9] In 1975, a referendum abolished the Sikkimese monarchy, and the territory was merged with India.[10]

Sikkim has 11 official languages: Nepali (which is its lingua franca), Sikkimese, Lepcha, Tamang, Limbu, Newari, Rai, Gurung, Magar, Sunwar and English.[11][12] English is taught in schools and used in government documents. The predominant religions are Hinduism and Vajrayana Buddhism. Sikkim's economy is largely dependent on agriculture and tourism, and as of 2014 the state had the third-smallest GDP among Indian states,[13] although it is also among the fastest-growing.[13][14]

Dhanshree Resort has come to be a top-notch Hospitality brand, which can boast of providing the finest facility and service, which its guests both deserve and except. The resort has always dedicated itself in providing its guests with an effortless and relaxing vacation at all times, which is why it is considered as one of the best in the vacation ownership and hospitality industry.

Do you offer transportation services
Yes, the hotel offers a car rental service.
Is my id/passport required at check in
Yes. ID/Passport required to check in to the room.
What forms of payment are accepted
Cash and bank account transfer.
What is check in /check out time
Check out time:- 12 noon
What is your cancellation/deposit policy
You can cancell reservation via telephone or e-mail atleast 15 days before booking date and you can deposit through bank account.
Whom I question about my bill
If yo will have any questions regarding your bill, you can call us at 03776262501.
Will your rooms allow rollaway beds
Yes. We provide rollaway beds and we do charge Rs.500/- extra for that.

" We loved Dhanshree Resort, Dulal our manager,  the food was so healthy ans fresh ¡!! All activities at Dhanshree were well done and worth it! We found Dulal to be most knowledgeable and accommodating. "

" As to our stay at Dhanshree, it will be remembered as one of our favorite places we´ve visited during our many visits to Kaziranga. The accommodations, food and staff service were excellent."

" We had wonderful visit, you have your own piece of paradise and we had a wonderful time with great food, hikes and accommodations. The tea garden & hill top at Dhanshree was fantastic. "

"Thanks for the royal treatment and beautiful hikes, the monkeys were the best and the rhino views extraordinary. I´m coming back for my honeymoon. Keep with the good work and the friendly atmosphere "

"Thank you for letting us share this special Eden of yours. To experience the intelligent and loving care which you are giving to this section of the planet is indeed impressive. Thanks for the great hospitality !! "

For Latest Offers Join Us

Join us in social media